Nestled amongst a canopy of trees and suspended several metres over a large rock shelf and natural stream, this landscape is reminiscent of a tree house

Among the trees Discover this article's resources 0

Every project has its own challenges – the key to a successful design is finding solutions that will allow you to use them to your advantage.

Although the topographical conditions of this site initially seemed restrictive, the nature of the landscape forced the design team to explore solutions that pushed the boundaries, and so eventually turned out to be an asset.

With a natural stream passing near the entrance of the house and a large rock shelf weaving its way through the property, access was a challenge, says landscape designer Dean Herald, director of Rolling Stone Landscapes.

"In light of the position of the creek and rock causeway, access to the property was limited and our design team was called in to develop concepts with the architect. A garage was attached to the front of the site but getting from there to the front door of the house was an issue," says Herald.

"Fortunately we were able to come up with an interesting solution and turn what had been initially quite a problem into a great feature." 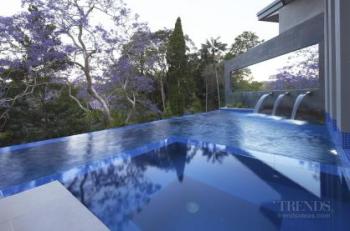 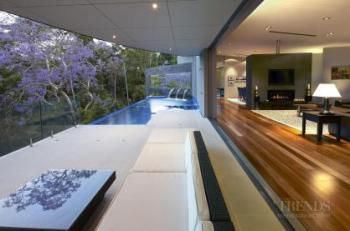 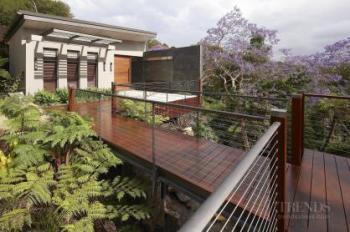 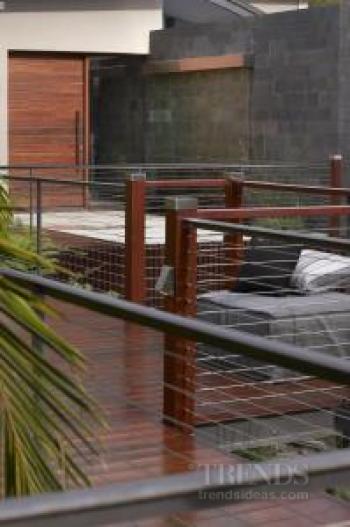 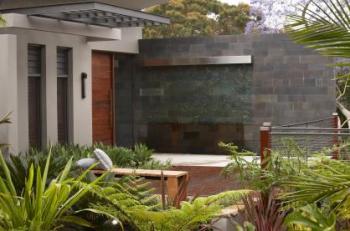 This feature is a hardwood boardwalk, suspended up to 5m above the stream and undulating rock shelves.

Moving in a zigzag pattern from the garage to the front door, the boardwalk creates a tree-top walk experience and provides views of the bush on approach to the house.

The swimming pool, which sits on the other side of the dividing blade wall at the entrance, was yet another challenge.

"Because of the nature of the landscape, a number of environmental regulations were in place, which again limited the options available to us," says Herald.

In order to keep within the guidelines, the pool was elevated and suspended over the rock so the natural landscape remains undisturbed.

The pool area, built in conjunction with the house, blends seamlessly with the architecture.

"Within such a limited space, the pool and architecture really had to work together. The water laps against the side of the house and because both were built and designed at the same time, it looks as if the house is sitting directly on top of it."

The 9m x 3.5m pool includes a built-in spa that is raised slightly above water level, creating an illusion of space. This is enhanced by an infinity edge over the rock shelf.

"One of the most dramatic features of the pool is the infinity edge, which opens the area out towards the bushland and foliage in the distance,"says Herald.

A mirror is attached to the pool side of the dividing blade wall – at first glance this appears to be a portal into another garden. The mirror reflects a large jacaranda tree back to a sightline inside the house.

"We wanted to create a visual connection between the house and the landscape so the owners could enjoy the views and also reinforce that feeling of being in the treetops."