A large, multi-functional island plays a pivotal role in this remodeled open-plan kitchen

All together now Discover this article's resources 0

Renovating a kitchen to meet the requirements of a young family doesn't have to mean compromising on style or sophistication. A carefully considered layout may be all that's needed.

This kitchen is the centerpiece of a large multi-functional space that includes the family room at one end and formal living and dining areas at the other. In a long and narrow, Victorian-era house, the previous kitchen was just one in a series of small, dark rooms, says architect Todd Main of Bauhs Dring Main.

To promote a more interactive family lifestyle, Main and the clients set about remodeling the home's first level plan.

Kitchen designer Ashley Cole of Atria Studio says the homeowners specifically wanted a space that would allow them to cook, entertain and socialize while keeping a close eye on their young children. A three-level island steps down and divides the kitchen into three separate areas. Its central position also acts to demarcate the formal and family zones.

"The raised panel at one end of the island is mainly for aesthetic purposes. As well as concealing kitchen clutter from the formal living area, the oval-shaped ledge can be used to display vases of flowers," says Cole. 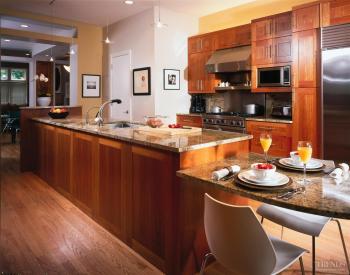 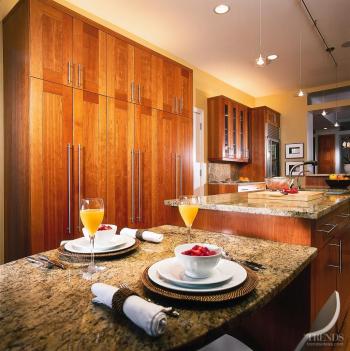 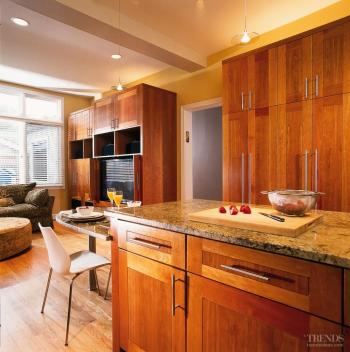 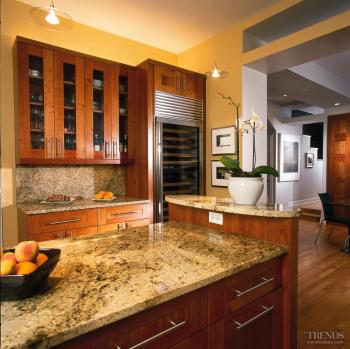 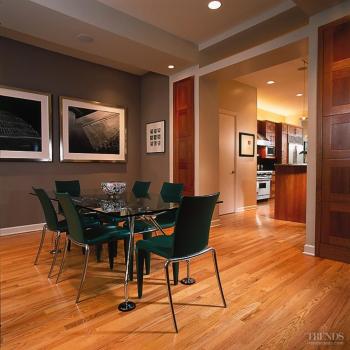 "The second part of the island, which includes the sink, has a wide granite countertop for food preparation. The owners also use this area as a buffet when entertaining large groups of guests."

The end of the island has been cantilevered to form a breakfast area, the lowest part of the island. It is strategically located opposite the family room and provides a convenient place for the children to eat their meals or do artwork, says Cole.

Cherry cabinetry with a modified Shaker-style door makes up the base of the island and the tall bank of cabinery on the adjacent wall.

The owners liked the look of this style of cabinetry so much they decided to use it thoughout the entire first level, says the kitchen designer. In the family room, for example, the cabinetry includes an entertainment center and toy cupboards.

In the formal dining room, Shaker-style doors were used to transform the home's original open shelves into a series of four columns. Each of the panels disguises extra storage, which can be accessed via touch-latch doors.

"The owners wanted a transitional style of cabinetry, something that wasn't too contemporary or too traditional. A central panel provides just the right level of detailing on the cabinet doors and, teamed with wide Shaker-style rails, helps to achieve a timeless look," says Cole.