All round outlook Discover this article's resources 0

There is really only one option for an architect asked to design a home for a large, slightly sloping site with expansive water views.

Architect Kim Veltman, who had previously designed another house for the owners of this waterside site, was asked to come up with a plan for their new home on a north-west facing 2000m2 property.

"Clearly the view was the main criteria, so we designed a home in which almost every area, apart from utility rooms, has an outlook onto the estuary," says Veltman.

Because of the size of the property, the only council restriction was on the height of the house. By cutting and filling, then building retaining walls, a fairly flat site was created and the architect was able to design a two-storey house.

To emphasise the dramatic aspect of the location, the front door and main entrance hall are shielded from the view by the bulk of the house. It is not until guests move from the main hallway and into the spacious double-height living space that the full impact of the outlook unfolds. 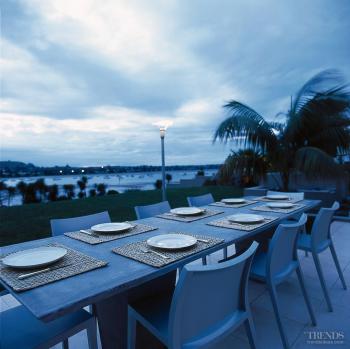 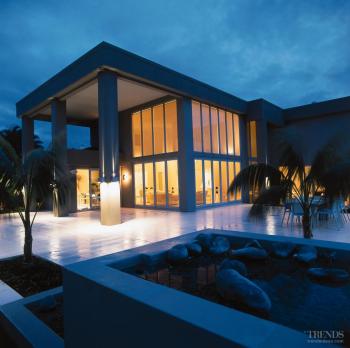 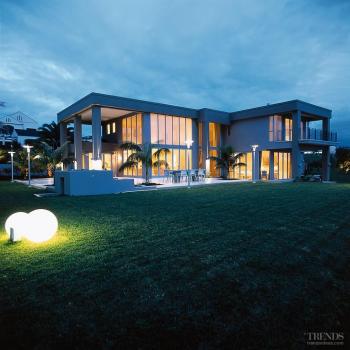 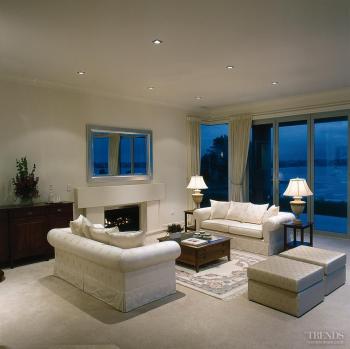 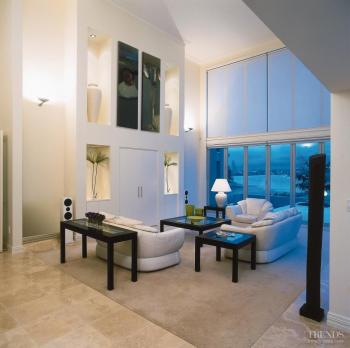 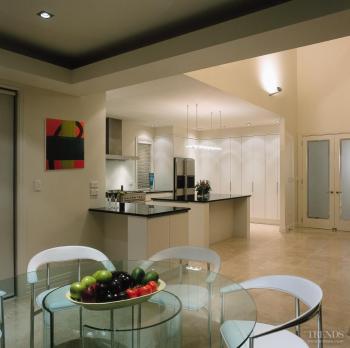 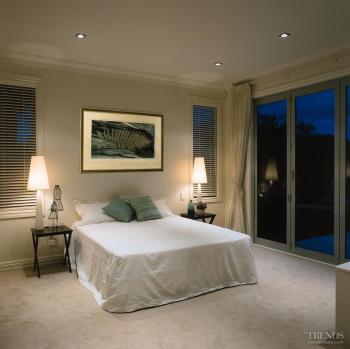 The house is angled on the site so that every room, depending on its use, catches the sun at different times of the day, and also enjoys different aspects of the view.

For example, the kitchen faces the east but at the same time looks west through large windows in the family room. Because of this, it receives both morning and afternoon sun and has expansive views.

The formal lounge, however, is on the western side of the house and benefits only from the later afternoon and early evening sun.

The lounge has been positioned a little closer to the estuary so it has a slightly different view out towards the harbour, rather than looking onto the marina at the end of the garden.

To maximise the views from the upper storey of the home, the living and dining areas on the ground level are both double-height, with glazing from floor to ceiling. The library, which is at the back of the house, has views of the estuary across the open, upper levels of the living spaces below.

The neutral tone-on-tone colours used on the walls, floors and furnishings throughout the house complement the views rather than compete with them.

"These neutral colours also create a restful ambience that makes the house feel like a refuge after a busy day," says one of the owners.

Lighting enhances the dramatic design and position of the house. It highlights architectural features and helps to pull indoor and outdoor spaces together.

"At night the whole site is lit up, rather than just the house, so that whether you are inside or outside, you feel a part of the same environment," the architect says.

Outside, Veltman has used water features and subtropical planting to emphasise the position of the house by the estuary. This also helps draw the view even closer.

"Palms help to frame the landscape and several small, man-made ponds, which can be seen from most parts of the house, make the estuary seem even closer," he says.

The layout of the house also lends itself to an easy connection between indoor and outdoor areas. All ground floor areas of the house flow out through large bifolding doors onto extensive tiled areas then open onto the lawn, which runs down to the estuary's edge.