Traditional ornamentation has given way to contemporary, minimalist lines in both the architecture and landscaping of this remodeled home

Updating an older property to reflect modern lifestyles and aspirations often involves extensive changes to a home's interior. But carrying the new aesthetic though to the exterior and the landscaping can make all the difference to the final outcome.

The house featured on these pages has been given such a makeover. Architect James Choate says the owner collects contemporary art and was interested a very abstract, modern architectural look.

"The house featured a lot of neo-historical ornamentation, particularly on the exterior," he says. "As it had a decayed infrastructure that needed repairing, we took the opportunity to peel off the traditional skin and reapply a modern aesthetic. At the same time, we wanted to allude to the original language of the house, so we introduced symmetry and proportion with clean-lined, simplified window designs."

Choate says each window is framed by a thin, steel shadow box, which provides functionality – protecting the window from the weather – and also gives the front façade a sense of depth.

The landscaping was designed as a series of outdoor rooms, starting with a sunken garden at the entrance. In keeping with the modernist look of the refurbishment, a new square-walled courtyard was established at the front of the house. This is overlooked by a fully glazed wall in the new master bathroom. 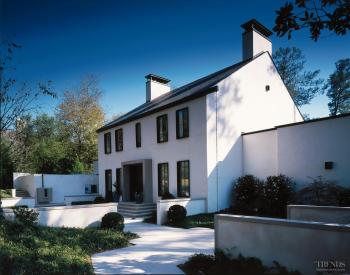 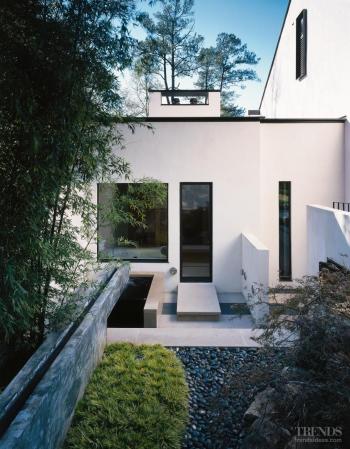 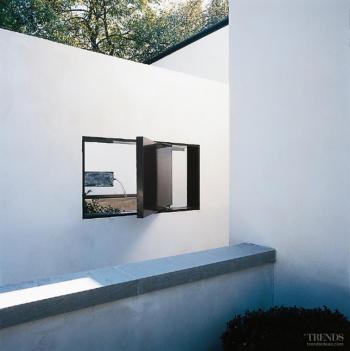 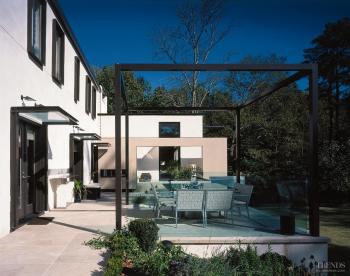 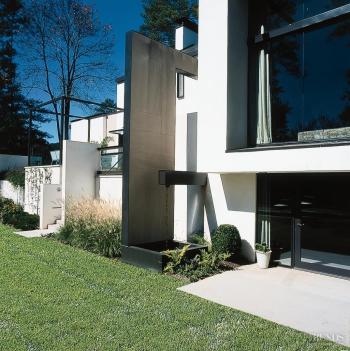 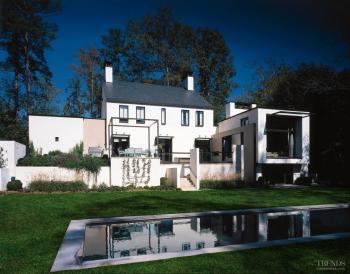 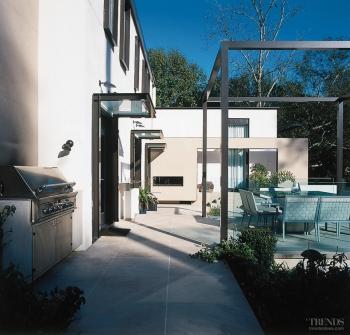 "This outdoor room effectively links the interior bathing space with the outside. The water theme of the bathroom is extended by an outdoor fountain, sluice and basin. These elements also have a strong, abstract feel."

A small pivoting window in the courtyard wall frames a view of the water feature from the front entrance. To further link these two areas, the water sluice is cantilevered out through a slit in the wall, and the channel of water culminates in a vanishing edge.

"The water and the maple tree within the walled garden add a calming, Zen-like influence," says Choate.

Another traditional Japanese feature is the cantilevered guttering, which directs rainwater down a chain to the ground. This avoids the need for downpipes, maintaining the streamlined look of the house.

A large, cube-shaped extension at the rear houses the new master bedroom. The cube shape is repeated in a steel structure that defines the outdoor dining area on the terrace. Steel shapes, like abstract awnings, extend from the master bedroom and the French doors, further emphasizing the abstract look.

A beige, steel-and-limestone wall with two cut-outs forms a plane between the master bedroom and the terrace.

"This creates the sense of a portal and expresses a layer of separation between the bedroom and the terrace beyond," says Choate. "It implies a line between the public and more private spaces. The horizontal cutout allows a view through to the fireplace in the bedroom."

A pool beyond the terrace, designed as a simple rectangle with a vanishing edge, echoes the minimalist feel.