Above the snow line

Above the snow line Discover this article's resources 0

Holiday homes in Australian ski resorts typically reflect a back-to-basics, low-tech design approach. In other words, they are simply a place to bunk down for the night after a busy day on the slopes.

But the developer of this show home in the Dinner Plain ski field area of Victoria wanted to show the potential of a new subdivision above the snow line. The Ray Group commissioned Grounds Kent Architects (GKA) in Perth and Studio Giovanni D'Ambrosio (Rome) to design a house and interior that would establish a new benchmark for alpine housing.

Architect Scott Bradley of GKA says the house needed to be defined by its architecture, but it also needed to work as a relaxing holiday retreat.

"We played with the romantic notion of an outside spa – but chose to put it inside the house, right in the centre of the living spaces," he says. "There is no reason why a spa has to be outside, or a spa bath has to be in the bathroom. With the floor-to-ceiling glazing, the spa area is rather like an internal courtyard."

The spa is positioned on a raised timber platform, which elevates its status both literally and figuratively. A long, narrow cutout in the wall adjoining the living area accommodates a gas fire, so the owners can soak in the tub in front of the fire while watching the snow fall outside. 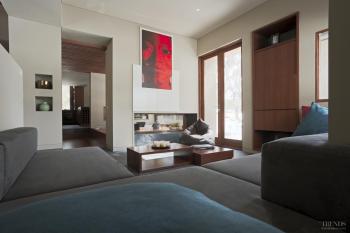 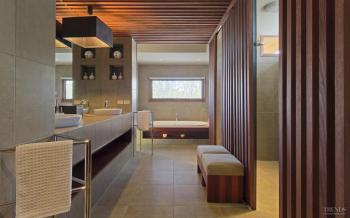 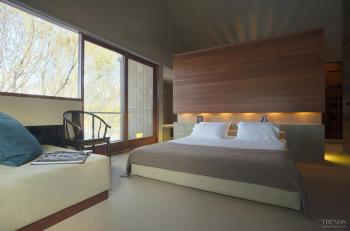 The cutout in the wall also provides a visual connection between the two spaces, while still retaining a degree of separation.

"The sense of intimacy is enhanced by the timber ceiling treatment," says Bradley. "The slatted jarrah timber on the bulkhead folds down to form the ceiling, effectively wrapping the space, ensuring it is visually warm and cosy. Similarly, the jarrah floorboards are in keeping with the traditional ski-lodge aesthetic."

Slatted timber is also a feature of the master bedroom suite on the first floor. A solid U-shaped freestanding wall behind the bed conceals the vanity area. On top of this is a slatted timber ceiling that extends across the bathroom and then folds down to form the exterior walls of the shower.

"The slats are open, so you can see through to the pitch of the gabled roof," says the architect. "The bathroom is defined as a box within a box – the bigger volume being the entire suite."

Timber also features on an insert in the vanity, the outsides of the U-shaped wall, and on the tub surround, where it provides a warm surface on which to sit.

"In terms of the material palette, we wanted to pick up on what was happening downstairs," says Bradley.

There is another dimension to the master suite, however. Large slate tiles feature on the floor, wall and vanity unit.

"The intent here was to make the vanity appear as though it had been carved out of one material," says the architect.