A touch of Baroque

A touch of Baroque Discover this article's resources 0

When adding a new room to a home that already has its own sense of character, there are two ways you can go: create a new space that stands out as a modern surprise within the house, or attempt to assimilate the extension with the existing style.

Cohen & Hacker, the architects who designed this master bath extension, took the latter a step further, using a mixture of materials to create a room that responds to the look and feel of the rest of the house, but exudes even more of the visual richness suggested elsewhere.

"We carried the wide wood trim used throughout the house into this room, then added a sense of drama with a vaulted ceiling. This also works to extend the sense of space in what is a relatively small room," says architect Stuart Cohen.

The ceiling is in keeping with the Baroque style established by the wood detailing, and the cream-and-gold color scheme of the bedroom. Also, as it is painted in silver leaf, the vaulted ceiling has a theatrical feel, says Julie Hacker.

"Along with the shine of the ceiling, shimmer is created by the one-inch glass mosaic tiles on the wall behind the bath – and this is also a reference to the other bathrooms in the house, which have the same tiles. The exterior of the tub is burnished pewter, which gleams in the light," she says. 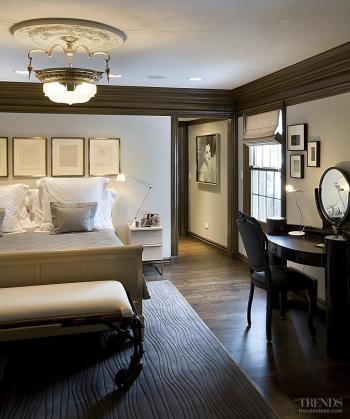 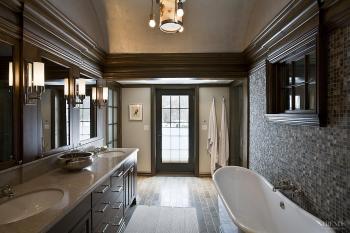 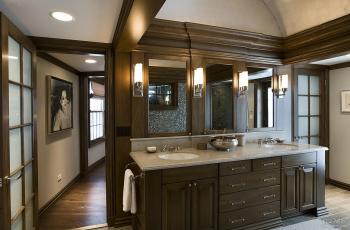 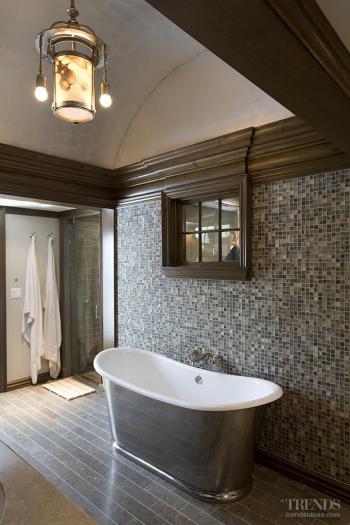 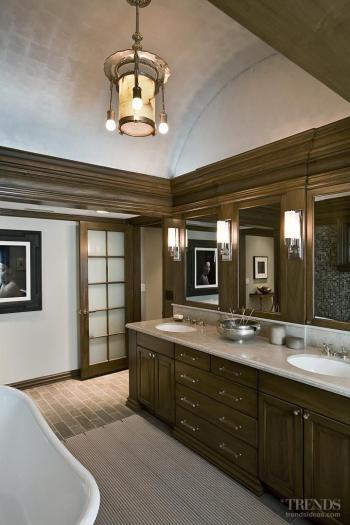 The rich brown walnut of the cabinetry exactly matches the wood trim. In the evening, lights beneath the toekick give the illusion that the cabinets are floating. This was a request of the homeowners, says Cohen.

"Another request was to conceal a TV behind the central mirror, where it can be viewed from the tub. Sconces on either side of these mirrors add a touch of Art Deco style that fits with the look of the wood. The main light source is an antique fixture that hangs from the center of the vaulted ceiling."

The walls of the walk-in shower feature the same Lagos Azul tile that is used for the flooring. The shine and color of this grainy tile is picked up in the burnished finish of the tub and also in the mosaic wall tiles. The shower and vanity fittings are a polished nickel that add to this look.

The bathroom accesses a deck where a large Jacuzzi is located. The shower can therefore be used as a rinse-off area, and the bathroom as a changing space for guests.

In order to lend natural light to the toilet room and shower stall, two small windows look through to the bathroom and outside. A clerestory window also lends light to the walk-in shower.