A sense of connection

With its large openings to family living and dining areas, this kitchen is the social hub of the house

A sense of connection Discover this article's resources 0

Even with the best intentions, home remodelling projects aren't always feasible. In extreme cases, it can be necessary to simply start over from scratch, as the owners of this home found.

But rebuilding a house also brings many benefits, including the chance to plan a kitchen to meet every requirement. For this young family, that meant a kitchen that would be the centre of family activity – a space that would relate to the family living area and the formal dining room.

"The house needed to cater to a modern lifestyle and allow family members to interact with one another," says Lundin. "The design of the kitchen, in particular, needed to engage the family area, while still preserving the sense of a separate room."

To this end, the kitchen forms part of a large space devoted to family living and dining. Positioned on a south-facing wall, it receives morning sunlight and remains bright throughout the day. Large, curved arches and columns – a feature repeated elsewhere in the house – open the kitchen to the family living room. 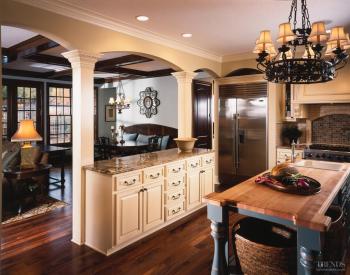 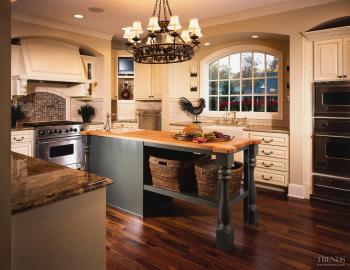 "In contemporary homes there is often less definition between these two areas. Here, the arches and columns help define the kitchen space, while still providing a sense of openness," says Lundin. "The design also allows family and guests to converse, without guests actually having to be in the kitchen."

Wide glass doors allow the kitchen to open up to the formal dining room on the other side. So, even with the doors closed, there is still a sense of connection.

The old-world character of the rest of the house continues in the kitchen, which is large enough to cater for several people working at once.

"The owners really like the dark wood and dark wall colours seen in traditional homesteads," says Hallberg. "We have continued the dark walnut floors through the kitchen, but there needed to be a balance so the kitchen wouldn't look too cavernous. For this reason the main cabinets are painted cream and ivory."

To create a visual link with the family room, the island base is painted in a blue-green hue. This is a slightly darker shade of the wall colour used in the family room.

A cooking centre at one end of the kitchen serves as the focal point of the room. It is in a direct line from the dining room, on the same axis as the island.

Additional cooking facilities are provided at the opposite end of the room.

"In a house of this size, there is an expectation the kitchen will be well suited to entertaining," says Lundin. "Providing large appliances and plenty of counter space is essential."

Ample storage was also a requirement. As well as the cabinet space, there are large wicker baskets for storing pots and pans.

Other accessories in keeping with the old world character include an iron chandelier and traditionally styled taps.