A river runs through it

This fully enclosed, minimalist courtyard creates a private spacethat links seamlessly to the main house and a separate studio

A river runs through it Discover this article's resources 0

Not everyone yearns for a grassy, tree-fringed garden. While such environments are favoured by those with green fingers, low-maintenance outdoor areas are an increasingly appealing option for homeowners who, instead of mowing and weeding, would rather spend their weekends relaxing.

Favouring the latter, the owners of this new two-storey, inner-city home commissioned architect Mark Cashman of Marsh Cashman Koolloos Architects to design an easy-care, minimalist outdoor living space that would suit their home and lifestyle.

"The house abuts the buildings on either side, so in some respects it's similar to a terraced house," says Cashman. "The courtyard area is located between the main house and a self-contained office at the rear of the site."

The heated lap pool had to be structurally designed to make allowances for the basement level beneath it, which houses a gym, wine cellar and the pool filter room.

With privacy a key requirement, Cashman created a walled-off courtyard space that opens out directly from the dining room and kitchen. 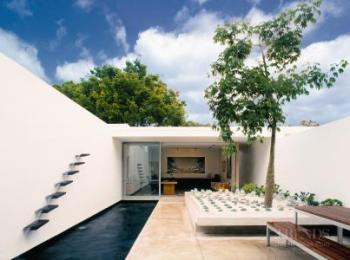 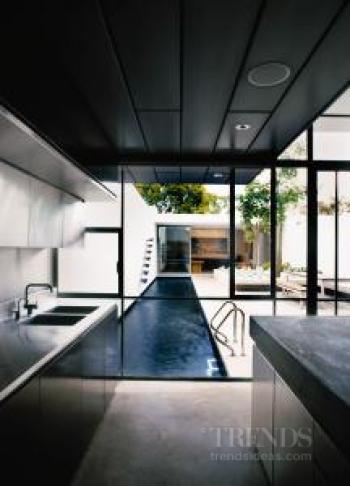 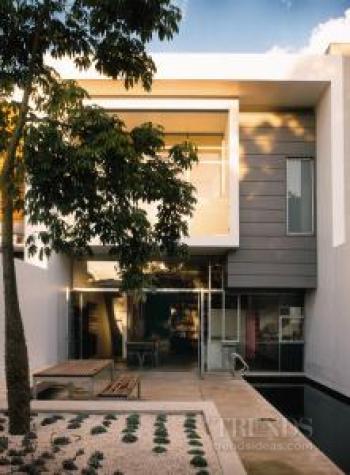 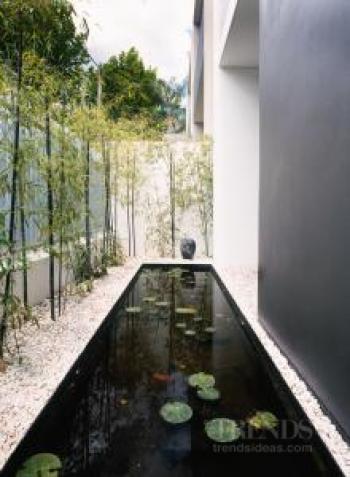 A seamless flow from the internal to the external was achieved by including sliding doors on both the dining room at one end and the studio office at the other. In addition to this, materials used inside the house are carried out to the courtyard.

"The concrete floor rises to become the planter and seat in the courtyard, then rises up again to form the kitchen island bench, hearth and internal steps," says Cashman.

The courtyard has a minimalist, architecturalfeel that reflects the design of the house. While the pool runs the length of one side of the courtyard, much of the opposite wall is occupiedby a large planter box filled with low-maintenance succulents. To minimise its visual weight, the base of the planter box is set in from the outer edges to give it the appearance of floating above the ground.

Running along the same wall, a wide concrete bench connects to the planter and provides additional seating for the timber-and-stainless steel outdoor dining table.

"At night, the subdued lighting creates a subtle mood," says Cashman. "The tree in the planter box is lit from below, with more lighting behind it. We also illuminated the pool and positioned lights to shine up to the ceiling of the studio."