Although built around the turn of the last century, this traditional villa has been extensively updated – the sleek, contemporary kitchen features back-lit glass panels

It has become a common renovation – gutting the rear of an older home to accommodate a spacious, open-plan living area. Such refurbishments invariably include a new kitchen, designed on sleek, modern lines.

"Visually, the kitchen couldn't be too dark or heavy," she says. "The owner also wanted something a little different – something that would set it apart."

"Many kitchens feature a similar design, in terms of the sink on the island and the cooking centre behind," says Labb. "So, for this kitchen, the difference is literally in the detailing. Specifying a thin 20mm benchtop, rather than a more predictable deep benchtop was one point of difference. The stainless steel banding was introduced to balance the depth of the benchtop." 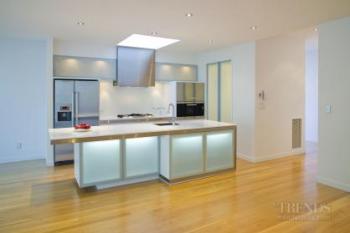 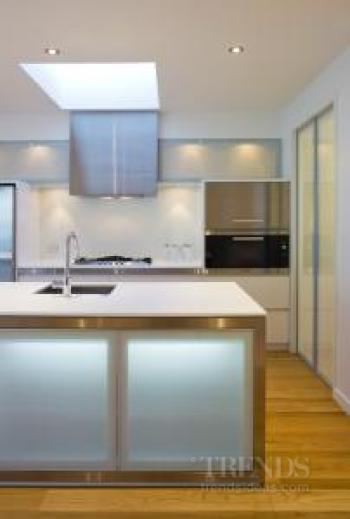 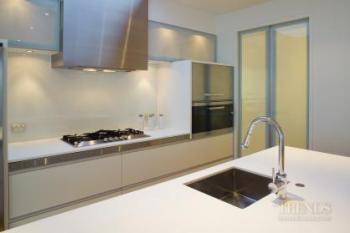 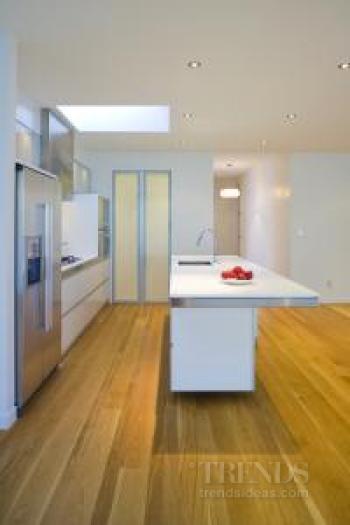 The illuminated front panels of the island and overhead lift-up cabinets enhance the contemporary feel. They also help to lighten the room. The sandblasted glass is repeated on two 700mm-wide doors that conceal a scullery. The aluminium-framed doors slide into the walls, which were specially built by a cabinetmaker to accommodate the narrow thickness of the glass.

Labb also designed a skylight to bring additional light into the kitchen, which is on the south side of the room. A custom-made stainless steel rangehood is positioned directly below the skylight.

The sleek styling extends to the symmetry of the cabinets housing the refrigerator and oven. A stainless steel cabinet above the oven also helps to visually balance the design.

Cabinets below the cooking centre have recessed handles, which reinforce the kitchen's streamlined, horizontal lines.

To fully equip the kitchen for entertaining, the scullery features a second oven, as well as an additional Fisher & Paykel DishDrawer, sink and wine refrigerator.

"Having a second food preparation area is invaluable, especially for people who like to entertain," says Labb. "For this reason, designers are increasingly specifying two or more work stations."