A home for all seasons

A home for all seasons Discover this article's resources 0

Deciding whether to remodel or rebuild is not always simple. If extensive remodeling is required, it may often be more cost-effective to begin again. However, preserving and expanding the charms of a character home can, in itself, be a highly rewarding experience. In many circumstances, a small cottage in a neighborhood of multimillion dollar homes would be considered ripe for demolition. In this instance, however, the owners, seeing the inherent potential, enlisted architect Bill Harrison, founding principal of Harrison Design Associates, to extend and modernize the existing structure. “Basically, what the clients wanted was a cottage-style home. The original building was a small, 1950s wooden cottage. This was increased in size by 150% to create this Arts and Crafts-influenced house,” says Harrison. With well-established, lush green gardens extending right to its perimeter, the home could easily be mistaken for a country retreat, rather than an urban dwelling. “The issue really gets back to what you want to achieve – your concept,” says Harrison. “Here, the owners liked the natural beauty of the land, and didn’t want a large, pretentious house. The house was designed to blend in with the English-style garden created by one of the owners, a landscape architect. The gardens are an Americanized version of an English Deco-style garden.” From the driveway, these gardens, with mature trees, disguise the size of the house. Spread over three levels, it features four bedrooms, all with large walk-in closets. Living areas, including an inglenook, open-plan kitchen and breakfast area, and a large, wooden-beamed family room, are all located at ground level. To take advantage of the year-round temperate climate, covered porches were also incorporated. Garden walls and steps are constructed from rounded riverstones. These same stones, used to add character to the extended front porch entrance, also form a stone veneer around the base of the exterior walls, creating a visual connection between home and garden. Other changes to the exterior included replacing the original wood siding with cedar shingles, and installing a new shingle roof. “Because of the scale of this project, a minimal palette of materials was required to maintain consistency. During the design process we took cues from the home’s interior, selecting natural materials, such as stone from the inglenook fireplace, and natural cedar, to accentuate the Arts and Crafts style,” says Harrison. Despite the extensive remodeling, the original structure can be distinguished from the exterior. Inside, the design maintains separate spaces, but opens up visual connections. “Next to the entrance is the inglenook. Here, we removed the existing wall, replacing it with columns. This creates separation, but not visually.” Past the inglenook, a new door connects the kitchen and living area with the entrance. With stained oak cabinetry, center columns, and a painted yellow island, the Arts and Crafts theme is reinforced in the kitchen. From the kitchen, and adjacent breakfast room, the home flows towards the family room at the back, which opens up onto a covered porch. Distressed, hand-hewn beams highlight the steeply-pitched roof in the family room, while a solid-green color scheme, and large windows, replicate the ambience of the garden. “There’s no rule saying the walls and ceiling have to be the same color,” says Harrison. “What makes the stone and beams stand out is contrast. The room also seems bigger when there are fewer colors.” 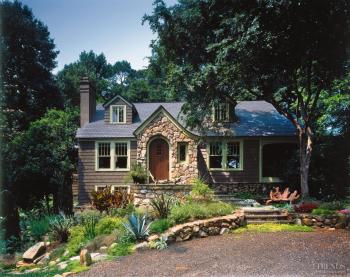 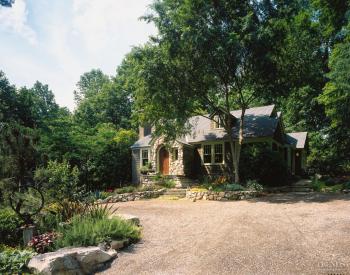 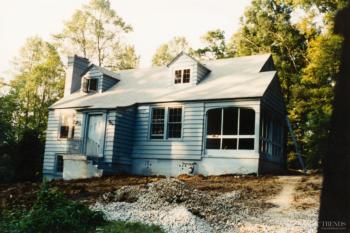 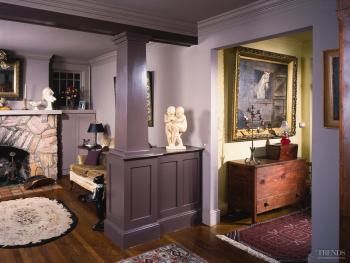 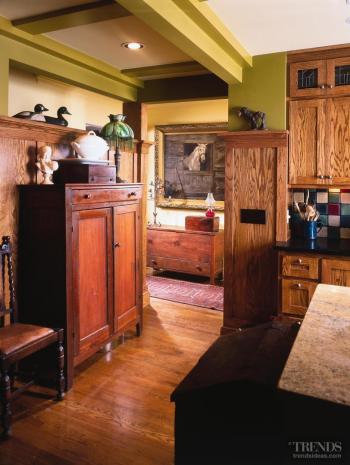 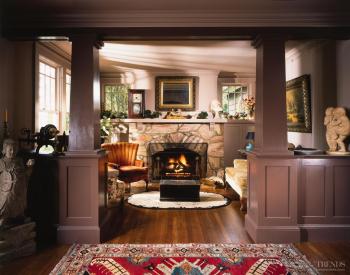 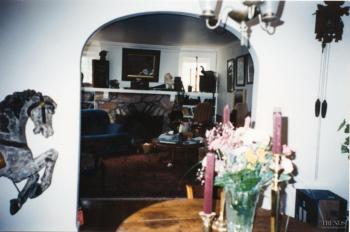 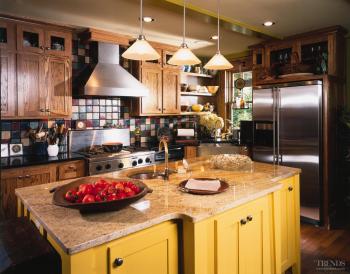 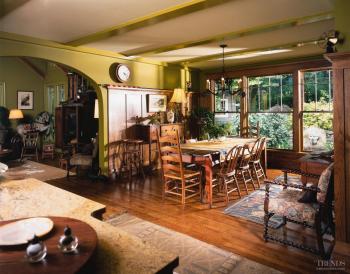 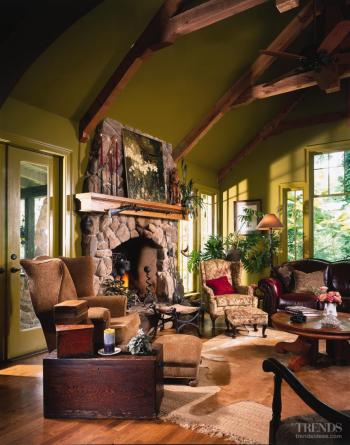 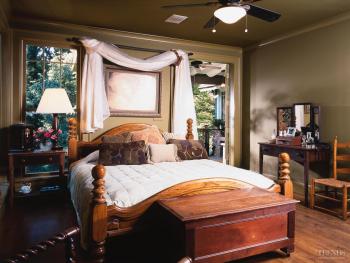 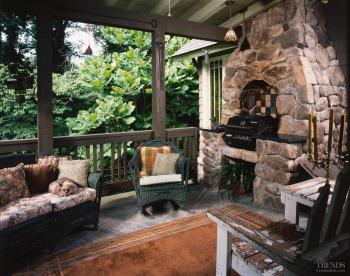 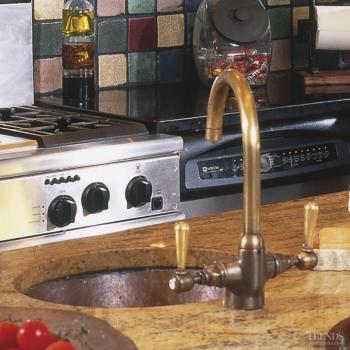