By preserving elements of the original structure, this converted barn becomes a chronicle of its past, while still providing a contemporary lifestyle

Readers of novels often find themselves imagining the thoughts and feelings of the author. The place where a good book was written may even be deemed magical by literary aficionados.

While not the exact setting where she wrote her books, this property was once part of an estate belonging to author Edith Wharton. It comprises three structures in a U-shaped arrangement: a barn, ice house and carriage house. When he set about remodeling the barn to create the house pictured, architect Stephan Green was interested in retaining a significant amount of the original character.

"The southern and western sides of the building had been exposed to weathering, while the eastern and northern sides were relatively well preserved. Homeowners Annette and Michael Miller agreed that we keep the country-style look of the sound faces, but take the opportunity to modernize areas that needed refurbishment. As part of this process, we added more glazing, which was scarce – not surprising in a barn," says Green.

Large windows were installed around the kitchen area, which is situated within the open-plan interior space. A clerestory window on the west face allows natural light into the building, while a large area of glazing gives a view from the kitchen to the garden. As well as reducing the need for reconstruction, the extra glazing has the benefit of making the house appear more contemporary on this side.

To help merge the old with the new, the shape of the new windows reflects the shape of the original barn doors on the northern face of the building, which were also converted into windows and doors. 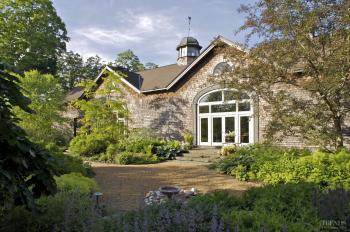 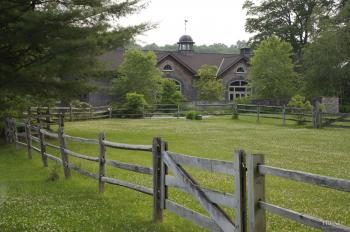 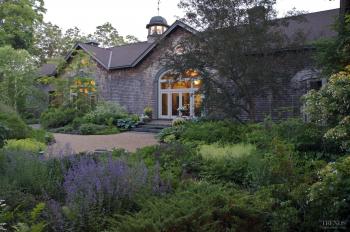 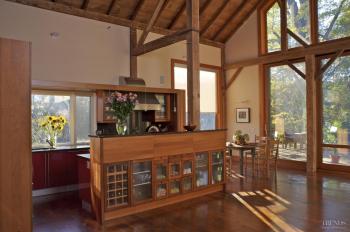 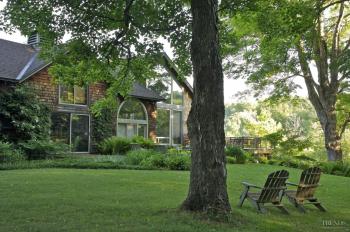 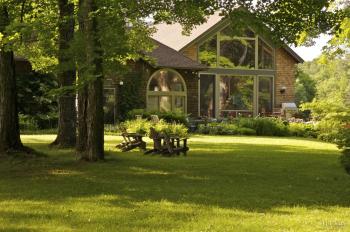 "These large, arched openings look out over a cobbled courtyard area enclosed by a low shingle wall – which we re-created after looking at old photos," says Green.

One of the openings contains a door made from the old barn door, while the other has a more modern glass door, which opens in front of the dining table.

"Inside, the remaining barn doors are mounted to create a frame around this window, providing a reference to the building's history," says Green.

Aside from these undertakings, it is the tack room that most clearly demonstrates an effort to preserve the past. Rather than establish it as a new room, it has been retained as a museum piece, viewable from the mud room through glass walls. This gives some visual interest to the mud room, which is otherwise purely a practical space, says the architect.

Where possible, the external shingles were salvaged, while new cedar shingles were used in the more dilapidated areas. In time, it is hoped that weathering will merge the old and new shingle siding. Also externally, the cupola was cleaned up, and lights were installed inside it to create atmosphere in the evening.

The carriage house and ice house were remodeled in the early 1980s. When the barn was converted, it was connected to the adjacent ice house via a glass walkway.

"This is another contemporary touch that gives the impression of walking into the outdoors. It also signifies a change in environment," says the architect.

Another aspect that amalgamates the old with the new can be seen in the kitchen. Screened from the rest of the living space by a partial wall, which contains cabinetry, the kitchen consists of contemporary Italian-designed recyclable red resin-paneled cabinetry, and stainless steel hardware.

"To prevent the kitchen from looking out of place in what is predominantly a country-style house, it is wrapped in a wooden shell of cabinetry – but inside, it has a very modern aesthetic," says Green.

In the rest of the space, Green has grouped seating to define the function of each area. Oversized, comfortable couches are arranged around a fireplace, which is made from locally quarried stone.

"This was one of the walls that needed to be refurbished due to deterioration. We created windows on either side of the fire, so the view can also be enjoyed."

Other seated areas include a breakfast table placed near the windows in the kitchen, and a space for reading, marked out by two comfortable chairs placed on a large Persian rug.

The walls of the interior make use of the barn framing. Plaster boards, painted a visually warm buttermilk yellow, are installed between the wooden frames. Flooring is pine, chosen to match the wooden bracework and also to fit with the character of the house.

"This is the largest one-bedroom house I have ever designed. The main area is a huge space, but the barn framing visually scales it down," says Green.

Landscape architect Walter Cudnohufsky was contracted to create the country-style gardens and courtyard surrounding the buildings. Green says that at times, the interior design was altered to coordinate with the plans for outdoors.

"The architecture of the house is based around taking full advantage of the variety provided by the surrounding landscape. Each opening leads to a very different environment," he says.

From the western side, the kitchen opens onto a deck that overlooks the original gardens on the property. From here, stepping stones lead down into this garden. The southern face, which contains the fireplace and large windows, steps down a level on the outside to view a swimming pool and pond beyond.